If Angels owner Arte Moreno’s longterm plans are realized, baseball fans will someday be able to grab a meal, browse through shops or relax in a 5-acre park just steps from the stadium, or even stay in a hotel overlooking the ballpark.

That enhanced fan experience is part of a master plan for the future of the stadium site that Moreno’s business partnership filed with the city of Anaheim on Tuesday.

The much anticipated plan lays out a vision for the 153-acre stadium site as a community with homes and offices, shopping, dining and other entertainment, and it reserves “flex space” that gives Moreno the option to someday replace the 1966 stadium with a new ballpark, a decision he has yet to make.

It comes as Ducks owners Henry and Susan Samueli are expected to file their vision for land around the Honda Center with the city, which is expected to include similar and complementary development. Taken together, the two sites, when built out, are expected to create a sports and en- 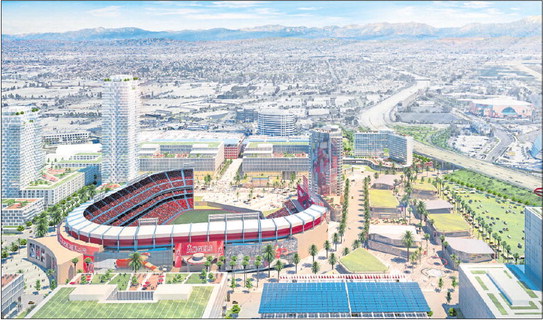 A proposed stadium development plan will include shopping, restaurants, entertainment, hotels, housing, offices and parkland at the 153-acre site. The plan also calls for eliminating the stadium’s outfield rock feature to let people stroll to a fan experience area.

tertainment-centered powerhouse that will draw visitors, house residents and businesses, create jobs and pump money back into the economies of Anaheim and Orange County.

Anaheim officials have long expected the stadium property and the surrounding Platinum Triangle district to be developed with urban-style homes, offices and entertainment businesses. But the new plan — shepherded by Moreno’s business partnership, SRB Management — only became possible after SRB and the city agreed in December to move from a stadium lease to a $325 million sale agreement, SRB Management spokeswoman Marie Garvey said.

The sale hasn’t closed, and the price could change with city amenities. Also, the master plan made public Tuesday is one of several steps toward completing the deal. Garvey noted it is conceptual and some details could change as the plan is finalized.

“The stadium development plan will realize the vision of the Platinum Triangle decades before the current lease allows,” Moreno said in a statement. “This plan is an important step in creating a driving economic force, while investing in Anaheim’s future.”

Had the Angels not opted out of their lease for the city-owned stadium in late 2018, they would have been locked in for at least another decade. Under the plan, baseball would remain front and center but would be part of a diverse, walkable community with office buildings (2.7 million square feet) flanking the stadium to the north and south and residential development (5,175 units) to the south and west with a 5-acre urban park at its heart. Two hotels would offer a total of 943 rooms and restaurants, shops and entertainment would add another 1.1 million square feet to the development.

Garvey said the City National Grove, a 1,700-seat performing arts venue on the stadium property, may eventually be replaced with commercial development, but “we have time to figure that out.”

The city asked for some of the housing to qualify as affordable; city and SRB officials are still negotiating how many units that would include.

The plan also calls for opening the stadium’s outfield — removing the rock feature — to let people stroll out to a fan experience area where they could sip a beer at a brewery, take their pick of several restaurants, see live music or enjoy pre- or postgame festivities.

“This plan has the potential to bring the great experiences of baseball cities such as San Diego or Chicago to Anaheim, and I look forward to reviewing it with my council colleagues,” Anaheim Mayor Harry Sidhu said in a statement. “Not only does this proposal speak to our vision for baseball in Anaheim, the investment it represents will help move our city past the economic impacts of the coronavirus in years to come.”

Hotels with a ballpark view — like one of the two hotels planned near Angel Stadium — are a popular amenity for fans who want to not only spend the day watching baseball but stay near the park, too, Ballpark Digest publisher Kevin Reichard said.

He likened the Anaheim plans to the Battery, a shopping and dining destination that abuts the Atlanta Braves’ home field, and was a moneymaker for surrounding Cobb County until the coronavirus closed businesses and postponed the baseball season.

The parking lot where the Big A now stands would become the flex space, which Garvey said could be used for outdoor entertainment, tailgating on game days and community events such as a farmers market when baseball isn’t being played.

Angels Booster Club President Karen Harkins, a lifelong fan, lives nearby but said she’s enticed by the prospect of dining, entertainment and accommodations next to the stadium.

“When they said they were going to put hotels there, what is the first thing I thought of? I could spend the night!” she said. “You really could make a weekend of it.”

Harkins thinks the development will be positive for fans like her, though she’s a little concerned about how the additions would affect traffic.

Parking structures around the site and some minor retooling of roads leading in and out are expected to make it easy for visitors, but Garvey said the plans also take advantage of the ARTIC transit station just across the 57 Freeway.

“This is going to be a unique community; you won’t find it anywhere else in Southern California,” Garvey said. “It’s really taking the entire vision of the Platinum Triangle, everything they wanted to accomplish, and putting it on this property.”

The Anaheim City Council is expected to take up the stadium property plan this fall, along with a development agreement that would spell out additional community benefits; the plan reserves space for a future police or fire station or community center.

When completed, the Angel Stadium development is projected to create 45,300 jobs and have a $7 billion impact on the local economy, according to SRB Management. 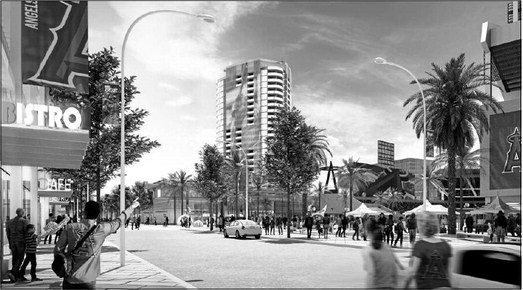 The development plan for the Angel Stadium property envisions people arriving on game days via local transportation hubs. The current parking area around the stadium will be transformed into retail, dining and entertainment properties.